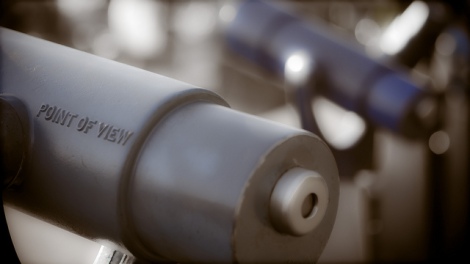 As George Carlin once said, “These are the things I think about when I’m sitting home alone and the power goes out.”

We have a tendency to attach judgement-based labels to the living things around us. And that’s because we have a certain viewpoint — a very anthropocentric viewpoint — about biology. We group plants, animal, etc., into good or bad based on how useful or harmful they are to us:

And it makes sense that we do that…we’re a species that is ultimately looking out for itself, its survival, and its genes. But if you step back a little, everything living thing is doing that. The wolf has to eat. The weed is just another plant, it’s just one that we think isn’t as pretty as Kentucky bluegrass. And the bacteria just wants to spread.

Which is how I got on the path of trying to envision what a bacterial infection would look like from the bacteria’s point of view.

The example that popped into my head is methicillin-resistant Staphylococcus aureus, or MRSA, a nasty little antibiotic-resistant bug and apparently a growing bane of NFL locker rooms.

Infect, colonize, pathogen…these are all words that describe from our point of view what  MRSA and garden-variety drug-sensitive staph are and what they do to make a home for themselves within our bodies. These words have strong negative connotations, ones that get our hackles up, and represent a point of view based on defense and protection.

For a moment, though, let’s try to describe an infection as MRSA would. (Want to make sure you keep our perspective, too? You can follow along with this book chapter about staph infections.) 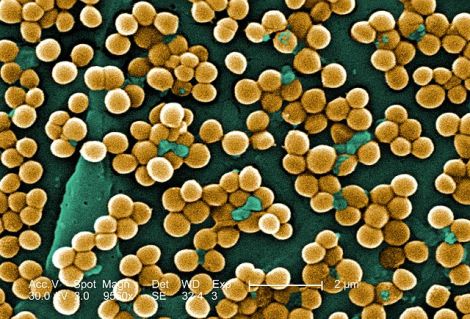 Resting in a locker room whirlpool, some MRSA bacteria find a scratch in a football player’s skin. Clinging to the wound-healing proteins they find there, they enter. Like pioneers entering an untouched fertile valley, the bacteria find everything they need to live: warmth, food, protection from the external environment. They start to harvest the resources of their new home, giving them the energy to divide. Soon, the bacteria have produced a thriving, robust community.

Within a short time, though, they encounter dangers in their new home. B cells arrive, producing antibodies that try to bind to their surfaces. Cells called macrophages appear, attacking and eating members of the community. Their home starts to get warmer, too warm for some members of the community. (In other words, the footbally player’s immune system has noticed the infection.) Many are killed  by the attacks.

But the survivors mount defenses, protecting themselves from ongoing waves of attackers that try to infiltrate their home. They stud themselves with proteins that protect them from being eaten, and start to release other proteins (we’d call them toxins) that attack the attackers.

Things soon reach a balance point, one that favors the defenders. Having used up many of the resources available close by, the bacteria continue to grow and expand, exploring new niches and looking for new sources of food and protection. (From our perspective, that means that football player is probably really sick at this point.)

But then waves of chemicals start to rain down on them. Suddenly, new, young bacteria can’t build their cell walls properly. Bacteria young and old have a hard time producing the proteins they need to live. Some can’t read their DNA anymore. (Translation: the patient gets treated with a β-lactam antibiotic, a tetracycline, and a quinolone.)

Luckily, the ancestors of these MRSA lived near other bacteria and exchanged genes with them. Soon, they start producing enzymes that break up many of the noxious chemicals, as well as proteins that pump the poisons out of their cell bodies. (In other words, the bacteria start producing antibiotic resistance factors.)

But it’s not enough. Over time, much of the community is killed, leaving only a few hardy survivors near the that first fertile valley. And even they’re not safe. One day, the last stronghold is destroyed and its defenders killed, cut out and sterilized. (Aka, the patient has surgery to remove dead tissues and pockets of infection.)

The community is gone.

When viewed from the bacteria’s point of view, the story of infection is just the story of life —  a search for food and shelter, for opportunities to reproduce and grow, and for favorable interactions with other species nearby. It’s ecology, just ecology within us. The bacteria is doing what it needs to do to survive.

As I’ve been writing this, I’ve been examining my own thoughts regarding the search for new drugs and other tools to treat and prevent antibiotic resistant infections. And I keep having these thoughts of, “Well, of course we have to stop them, they’re killing us!” It’s a visceral, primal, preservation-of-the-species kind of response. It’s hard to step back and try to think of infection dispassionately as a series of survival events for the bacteria.

Why think of it that way? Maybe there are insights that can be gleaned that can help us find new ways to beating the bacteria back by better understanding what they’re doing in us.

Or maybe it’s just me sitting in a dark room, waiting for the power to come back on.