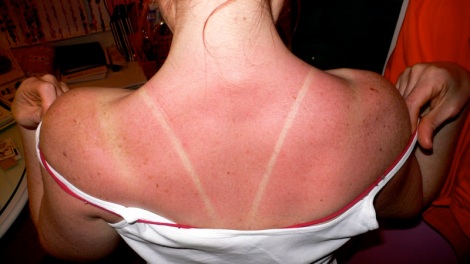 When my wife (not the unfortunate lass above) and I came home from the beach a couple of days ago, we realized that we were both suffering from a mild case of acute cutaneous solar poisoning. Which is to say, we both had sunburns.

Because that’s what a sunburn is: a form of radiation burn, the result of UV light poisoning our skin cells. In some sense, it’s not unlike burns from heat — heat, after all, is also radiation, but in the form of infrared energy — but the mechanism is very different.

Given that we’re in the thick of summer (in the Northern Hemisphere, anyway), I thought it might be a good time to talk about the biology of sunburns.

Let’s start with UV light, the bane of your skin’s existence. UV light is divided up into three groups or bands based on its frequency:

When UVB light alights on your skin, the rays will sometimes hit a cell’s DNA. This can damage the DNA, it’s thought by causing thymine bases (the T in the genetic alphabet’s ATCG) to bind directly to each other in an unusual way: When UVB light hits DNA, it can cause thymine bases to bind together directly (right). They’re not supposed to do that. (Gerriet41/Wikimedia Commons)

Cells don’t like it when their DNA is damaged, so when it happens a whole bunch of things start to happen. First, the cell turns on its own DNA repair response to try to fix what the UVB did. Other cells start to produce the pigment melanin, darkening the skin and absorbing UVB before it can cause more mischief. (Which means there’s no such thing as a “healthy tan.” A tan is a sign that UVB has gotten by whatever sunscreen you put on and that your body is in defensive mode and is trying to prevent cellular damage.)

I have to stop here for a second and express my admiration for our cells and molecular machinery that runs within them. It’s amazing to me from an evolutionary standpoint that our cells can not just detect DNA damage but pinpoint the exact kind of damage caused by UVB exposure and produce pigments to stop just that kind of damage. It’s evidence of exquisitely tuned abilities to sense and respond to damaging environmental factors at a molecular level. And it blows my mind.

Apologies for the interruption; back to the science.

Anatomy of the skin. It’s cells in the top layer — the epidemis — that gets damaged by UVB light. UVA can penetrate and affect deeper layers. (NCI/Wikimedia Commons)

The damaged cells also try to call in help, producing proteins and other factors that promote inflammation — the body’s way of stopping and repairing most any kind of damage. So all that pain, redness, and swelling you have at a burn? That’s not the burn itself, but the result of your body’s inflammatory response to it.

Inflammation triggers pain nerves at the site of the UV damage, telling the brain, “SOMETHING’S WRONG!” Tiny blood vessels called capillaries, which bring oxygen and nutrients to the skin, start to swell, bringing in more blood (which makes the damaged skin redder and warmer) and also immune cells to start repairing what’s been done.

Even though it only takes about 15 minutes of UVB exposure to start a sunburn, it can take four to six hours for the inflammation to really kick in, which is why the redness and pain don’t show up immediately.

If the damaged cells can’t fix their DNA, then they start to commit suicide. But it’s a particular kind of molecularly programmed suicide called apoptosis. It’s a neat and tidy process, as described in this excerpt from The Molecular Biology of the Cell:

[A] cell that undergoes apoptosis dies neatly, without damaging its neighbors. The cell shrinks and condenses. The cytoskeleton collapses, the nuclear envelope disassembles, and the nuclear DNA breaks up into fragments. Most importantly, the cell surface is altered, displaying properties that cause the dying cell to be rapidly phagocytosed [eaten], either by a neighboring cell or by a macrophage…before any leakage of its contents occurs. This not only avoids the damaging consequences of cell necrosis but also allows the organic components of the dead cell to be recycled by the cell that ingests it.

The end result of apoptosis may not look so neat and tidy to us though…as the damaged skin cells die, they start to peel away from underlying skin layers, which is why your skin peels after a burn.

Luckily, we have a way of stopping this UVB-driven molecular madness: sunscreen! Now, I had thought to go into the chemistry of sunscreen here, but as I’ve been reading I’ve come to realize that I’ve barely scratched the surface, and could write a whole separate post on that topic. So stay tuned for next week’s post.

UPDATE: Turns out I wasn’t the only one thinking about sunburn today. LiveScience.com also posted an article on sunburn as part of their Science of Summer series. Check it out!.

5 responses to “Feel the burn. The sunburn, that is. [Updated]”