Summer’s here, pools are open, and it’s time for a swim. Which means it’s also time for that annoying clogged feeling in your ears as you climb out of the pool: you have water stuck in your ear.

But why does it get stuck in there? You’d think it would flow in and just flow out again. Turns out a basic physical property of water makes it stay in there, and it’s that basic property that you have to overcome in order to get it out.

It’s all about water’s surface tension — the force that lets you float a paper clip on the surface of a glass of water or that lets a water strider walk across a pond:

And lets you make really big and awesome bubbles out of soapy water, like this guy:

See how the hydrogen atoms (white balls) cluster to one side of the oxygen atoms (red balls)? (Qwerter/Wikimedia Commons)

As a result, one side of a water molecule — the side with the hydrogens — has a slightly positive electrical charge, while the other has a slightly negative charge. Because of these charges, water molecules strongly attract each other and form what are called hydrogen bonds (the 8’s and dotted lines in the image above).

Floating around in a glass of water, the attractive or cohesive forces between the molecules are all balanced out — every water molecule is surrounded by other water molecules and “feels” the same attraction on all sides of it. (I thought briefly about working in some kind of think-of-a-bar-on-a-Friday-night metaphor here, but stopped short of diving in.) 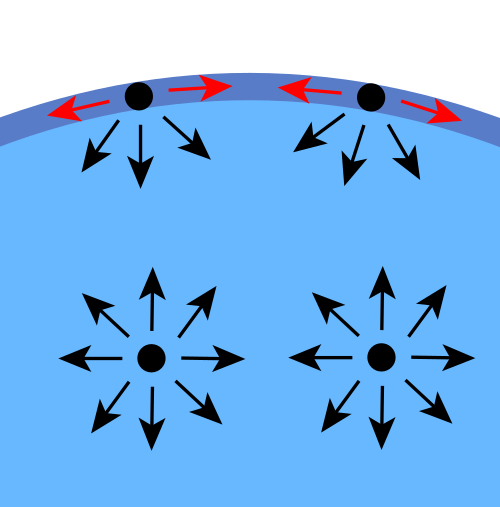 This stronger attraction forms a barrier between the liquid water and whatever is on the other side of the surface.

What does all this have to do with water in your ear? Because of surface tension, water molecules want to stick together in a droplet. It’s the reason small amounts of water will, left to their own devices, form spherical droplets: a sphere is the most stable shape for water because it has the lowers possible ratio of surface area to volume, keeping the cohesive forces at the surface balanced and as low as possible.

And it’s important to get that water out. The CDC estimates that people go to the doctor or hospital between 1.7 and 2.7 million times each year for otitis externa, the fancy name for swimmer’s ear, where water stuck in the ear regularly or for long periods of time provides a fertile breeding ground for bacteria and other microbes (and really, do you want anything to be breeding in your ear?). In 2007, an estimated one in every 123 people in the US had to see a doctor for swimmer’s ear, making it a rather common problem.

2 responses to “Got water in your ear? Blame cohesion”