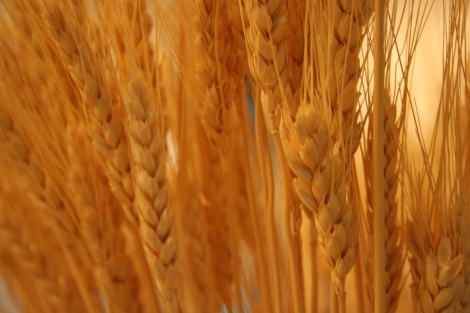 I have a number of friends who either are celiac, have children who are celiac, or otherwise don’t go near gluten. For that reason, I started to get curious about what role the gluten protein plays — not in the body, mind you, or even in bread making, but in the wheat plant itself.

Off to the internets, where I poked around for a couple of days before realizing that gluten doesn’t actually exist in wheat. Rather, gluten is a sticky, elastic combination of two wheat proteins — glutenin and gliadin — that is produced as part of the bread making process.

(Actually, it’s a little more complicated than that, because glutenin is actually a polymer, a mixture of related small and large proteins. But we’ll knead them together for our purposes.)

Together, glutenin and gliadin make up about 80% of a wheat kernel’s protein content. Cook’s Illustrated’s The Science of Good Cooking gives a good explanation of the roles they play in bread making (if you have the book, it’s on page 332):

Glutenin is a very large, loosely coiled protein while gliadin is a much smaller and tightly coiled sphere. Glutenin provides most of the strength and elasticity of the dough, allowing it to bounce back after it has been stretched. Gliadin provides its stretch.

It’s the mixing of wheat flour and water that encourage gliadin and glutenin to start linking together into the scourge of the celiac. Kneading the dough makes gluten stronger and gummier, and gives it the ability to trap the gas bubbles produced by the dough’s yeast, helping the bread to rise.

But this has taken us off track a little. What do glutenin and gliadin do in the wheat?

From a biochemical standpoint, glutenin and gliadin are what are called storage proteins. They’re found in a particular part of the wheat kernel called the endosperm, where it stores nutrients (largely as starch) for the wheat germ — that is, the wheat embryo. It’s the endosperm that we grind up to make wheat flour; grinding up the endosperm, germ, and bran together gives us whole wheat flour. 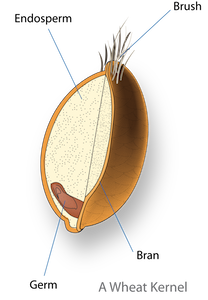 The wheat kernel and its parts. (Jkwchui/Wikimedia Commons)

Storage proteins are kind of like self-storage units where plant cells hold on to carbon, nitrogen, and sulfur: the raw materials for amino acids, themselves the building blocks for making more proteins. In the wheat kernel, they basically provide enough of what it needs to start to grow into a new wheat plant.

In mature plants, storage proteins hold onto materials that the plant needs to produce fruit and pollen. Then also help plants start to grow again if they’ve had to lie dormant for a time. (If you want the complete word on what plant storage proteins do, you should read this Journal of Experimental Biology article by British agricultural scientists Peter Shewry and Nigel Halford.)

Of course, none of this explains how gluten triggers the characteristic inflammation of celiac disease. That has more to do with how the gliadin and glutenin proteins are built. As this 2012 paper notes:

Translated: There are nearly 160 parts of gluten that are known to cause people’s intestines to go haywire. That right there is good enough reason to stay away from the bread.

One response to “What’s gluten doing in there? (In the wheat plant, that is.)”